GE Reports Vietnam
Industries Energy Connection
“If a problem gets brought up and it isn’t addressed, people just grow apathetic or complacent,” says Nathalie Deney, an engineer in GE’s Operations Management Leadership Program. “But with these lean lines, when a problem’s brought up and the team’s able to see immediate responses, that’s what brings about more suggestions for improvement.” Image credit: Andrew Robertson for GE Reports.A Name In The HatThe team spent 11 weeks moving machines outside of the plant, digging up their concrete foundations with jackhammers, and putting the new line in place. When they were done, they were able to cut the distance the bucket had to travel from 3 miles to a mere 165 feet. They also slashed the time it took to machine the bucket by 42%.It was an important early victory that showed everyone at the plant the transformative power of the lean system. But the vast majority of the factory, which still didn’t have a manager after the previous leader left, kept working the old way. That’s when John Kenney stepped up.

Kenney started his GE career in Greenville as a young engineer in 2000, put in time at GE factories in Duluth, Georgia and Bangor, Maine, and returned to Greenville in 2015 as a global sourcing leader. In 2019, when GE was looking for a new plant leader in Greenville, he raised his hand. “There are a lot of great people here and I felt like I could help Greenville move in the right direction,” Kenney says. “I knew Greenville could turn around and I wanted to be part of the turnaround. So I threw my name into the hat.”

Things at the plant were still rocky, and the volatility reached beyond manufacturing. People were leaving and anxiety hung in the air as the entire GE unit was still struggling to get on its feet. The first thing Kenney did after getting the top job was to keep the spotlight on lean: “I focused on stabilization and creating an environment that could embrace lean. “It was the one thing that was going well for us among all the noise.”

Partnering with Boucher and his team of lean experts, Kenney started holding lean “workouts” where managers and workers could get a taste of the new approach. “I’m not a lean expert but it’s a very logical, kind of natural thing for me,” Kenney says. “It was something I could easily embrace and get my head wrapped around. The benefits were so easy to see.”

With Boucher acting as a coach, they started bringing people to the first “model” line for the bucket, showing them how lean works and what the benefits were. “Jon helps the team to think differently about how to run a shop, from eliminating waste to setting up a new line,” Kenney says. “He is a huge driving force behind making lean successful not only here, but also at other places.”

The workouts started with just a few dozen Greenville employees, but Kenney and Boucher later opened the training to visitors from other GE facilities. GE CEO Culp attended one held last spring. Sharing his “takeaways” in an email to GE employees, Culp said that “nothing beats ‘hands-on’ learning. I lost count of how many times I heard this today. Even if you’re not a manufacturing guru, an experience like this is the best way to really absorb the fundamentals of lean. It’s exhausting, but deep learning and good fun. If you experience something, you’re unlikely to forget it.”

Kenney and groups of Greenville employees also traveled to other GE businesses to experience their approach to lean. “Until you learn differently, you only know what you’ve seen,” Kenney says. “Seeing how other folks are doing things helps broaden everyone’s mind. It’s a big, big, thing.”

Boucher agrees: “A lot of people might wonder why there isn’t just a small team of people that go from plant to plant to set up lean lines or redo the shop floor,” he says. “The reason is that you need the whole culture engaged. This is about all the employees. They need to see things the same way.” 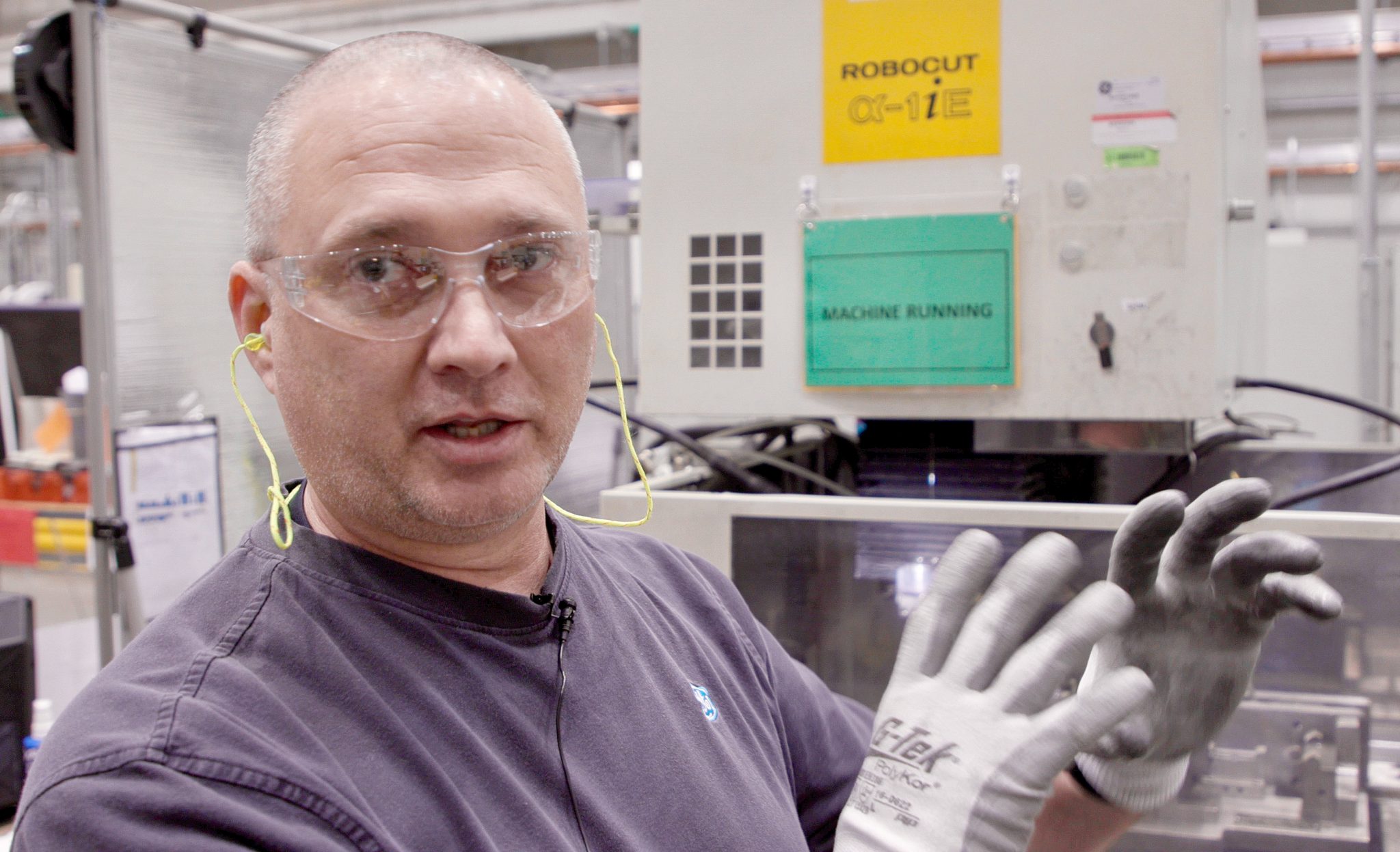 “Before you had to wait up to an hour before the help would even come to you, and most of the people didn’t even have an idea what the issue was,” says machinist Matt Ferguson. “Now you’ve got people that are involved in that, they are the ones who are feeling the pain [with us]. It’s a whole lot easier on the operators now.” Image credit: Andrew Robertson for GE Reports.

Engagement is also the reason why Greenville plant managers — known here as “support staff” — moved their desks to the shop floor. The goal is to be closer to the operators and help them out when their line stops. Operators, says Boucher, are central: “They’re the ones that know the process far better than anybody else on the shop floor.”

Nathalie Deney, an engineer in GE’s Operations Management Leadership Program who’s finishing her rotation in Greenville, is responsible for one of the lean lines. Her desk stands at the end of a line and next to a whiteboard where workers discuss issues at the beginning and end of every shift. She says the proximity to the line helps production as well as morale. “If a problem gets brought up and it isn’t addressed, people just grow apathetic or complacent,” Deney says. “But with these lean lines, when a problem’s brought up and the team’s able to see immediate responses, that’s what brings about more suggestions for improvement. It’s just a cycle that builds on itself, where the more problems you solve, the more problems are brought up and the faster we solve them.”

Matt Ferguson, a machinist working on Deney’s line, gives her the thumbs up. “Before you had to wait up to an hour before the help would even come to you, and most of the people didn’t even have an idea what the issue was,” he says. “Now you’ve got people that are involved in that, they are the ones who are feeling the pain [with us]. It’s a whole lot easier on the operators now.” 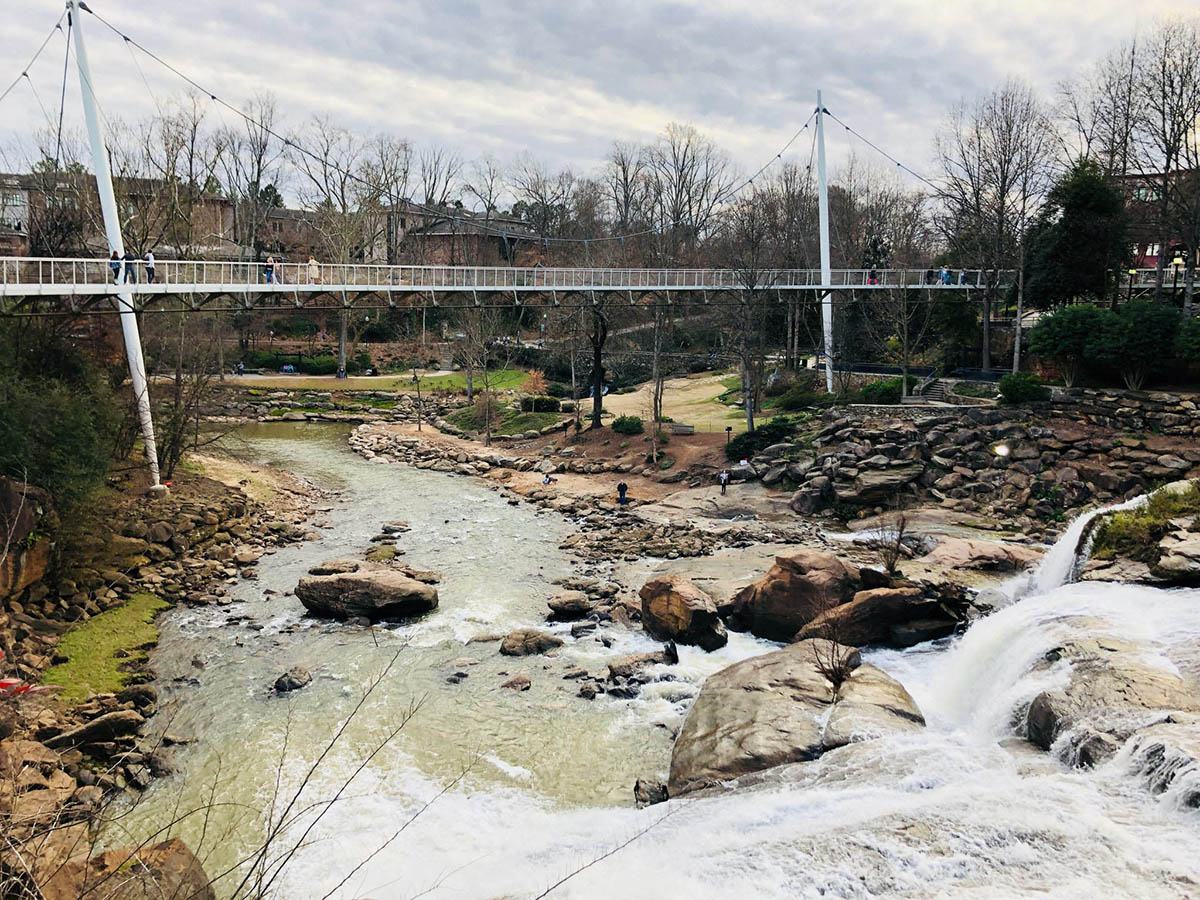 Just like its hometown, the GE Gas Power plant in Greenville has been able to turn things around. Image credit: Tomas Kellner for GE Reports.

If lean sounds like a magic bullet, it might just be. The approach helped the Greenville plant improve quality and productivity, reduce inventory, and create an engaged workforce, without sacrificing one or the other.

Kenney and his team have put 10 lines inside the plant and more are ready to go. It took 11 weeks to put the “model” line in place. Now, the team can launch a new line in just 3.5 weeks.

Not even the COVID-19 pandemic stopped Greenville’s lean transformation. The plant has remained open due to its essential work, and the team has continued leading lean action workouts, albeit virtually, to drive the transformation forward. They even used lean principles to address the pandemic locally. For example, lean’s continuous improvement mindset has helped the plant become one of the first GE manufacturing plants in the U.S. to implement temperature monitoring for every employee.

Taken together, the improvements have allowed the team to cut overall production time — or lead time — for the HA turbine from a year and a half in 2017 to less than 40 weeks, down nearly by half, including the time it takes to get parts from suppliers. Inventory levels are down by half, saving the business hundreds of millions of dollars in capital. The plant is now working to lower the number of weeks it takes from a turbine order to shipping by a further 25% by the end of 2020.

Pulling old machines out of the plant and breaking up inefficient clusters also freed 50,000 square feet of factory space, with another 100,000 square feet on the horizon. Plant leaders want to use this space to bring more lucrative services and repair work in-house.

But Kenney says the plant is still just starting out. He has big plans for lean, counting on it to be “the enabler” for innovation, manufacturing and services, as well as for winning in the market. “I’m not saying that every day is perfect in the manufacturing shop, but morale is much better,” he says.

Says Kenney: “When the team understands the direction, the feeling is good, the atmosphere is good and the culture is good, even if it’s a 1,000-mile journey.”

Charged Up: This GE Tech Is Engineered To Speed Up Energy Transition