One of the last business trips Danielle Merfeld took before the pandemic was to get an up-close look at the prototype for GE’s Haliade-X, the most powerful offshore wind turbine in operation, installed at the tip of the Port of Rotterdam in the Netherlands. Merfeld, who is the chief technology officer at GE Renewable Energy, recalls feeling a sense of awe as she watched the three blades — each spanning the length of a football field — turn slowly on the 260-meter turbine tower, generating enough energy to power tens of thousands of Dutch households.

“When I saw that in person and went into the bottom of the tower, you can’t help but look up and think, ‘We did it — we made this cool thing that’s going to sit out in the ocean and create renewable energy and help power the world,’” Merfeld says. “Most of the big cities in the world are right on the coast. Forty percent of the world’s population live within 100 kilometers of the coast. And that’s where offshore wind is going to make a big difference.”

Getting a firsthand look at some of GE’s latest technologies around the world is one of Merfeld’s favorite parts of her job. While nonessential travel has been put on pause due to the pandemic, Merfeld had a special virtual visit to look forward to on her calendar: On Friday, April 23, she addressed via video the Leaders Summit on Climate organized by the White House (see video below). The virtual event brought together President Joe Biden and leaders of 16 countries responsible for 80% of global carbon emissions and global gross domestic product (GDP), as well as a small number of civil society leaders and business leaders like Merfeld. “I’ve never gotten to do anything that exciting before,” she says.

From her home in North Carolina, Merfeld talked about the work GE is doing to speed up decarbonization around the world. She delivered a presentation showcasing GE’s investments in innovation and some of GE Renewable Energy’s latest technologies and research projects. They include a joint program with the Department of Energy to develop new superconductive generators for wind turbines, based in part on similar technology used in MRI systems. “We plan to use those in future offshore wind turbines,” she says. “It will help us get to even higher power without an increase in size and weight at the top of the tower. This, in turn, will drive the costs down.”

Merfeld also announced a commitment of up to $100 million by the GE Foundation, an independent charitable organization funded by GE, to create Next Engineers — a global college-readiness initiative focused on increasing the diversity of young people in engineering. “We know that for innovation to succeed, we must promote diversity in our thinking and ensure we tap the thoughts of many communities,” she says. “This program will introduce students to engineering concepts and careers and ultimately award scholarships — developing the next generation of engineers focused on building a world that works.”

Top and above images: “It really feels like we’re changing the world. This is an area where we’re reinventing the energy sector, making it more sustainable and affordable, and everybody can sort of connect with that,” says Danielle Merfeld,  chief technology officer at GE Renewable Energy. Top and above images credit: Danielle Merfeld. Video credit: GE Renewable Energy.

Ever since she was a child, Merfeld has been drawn to challenges, whether putting together a puzzle or doing a science experiment. “The thing I really love about the work I’m doing now, and for a long time at GE, is that I’ve always gotten to work on problems like these,” she says. “It really feels like we’re changing the world. This is an area where we’re reinventing the energy sector — making it more sustainable and affordable, and everybody can sort of connect with that.”

Building on a passion for technology, Merfeld earned a Ph.D. in electrical and electronics engineering from Northwestern University. She has held a variety of roles at GE over the past 21 years, most recently serving as vice president and general manager of GE Global Research. She is also the co-leader of GE’s global Women’s Network, which works to attract, develop, inspire and retain female talent within the company, and is a big advocate for girls and women in professional and educational science, technology, engineering and math programs. In February she was elected to the National Academy of Engineering. 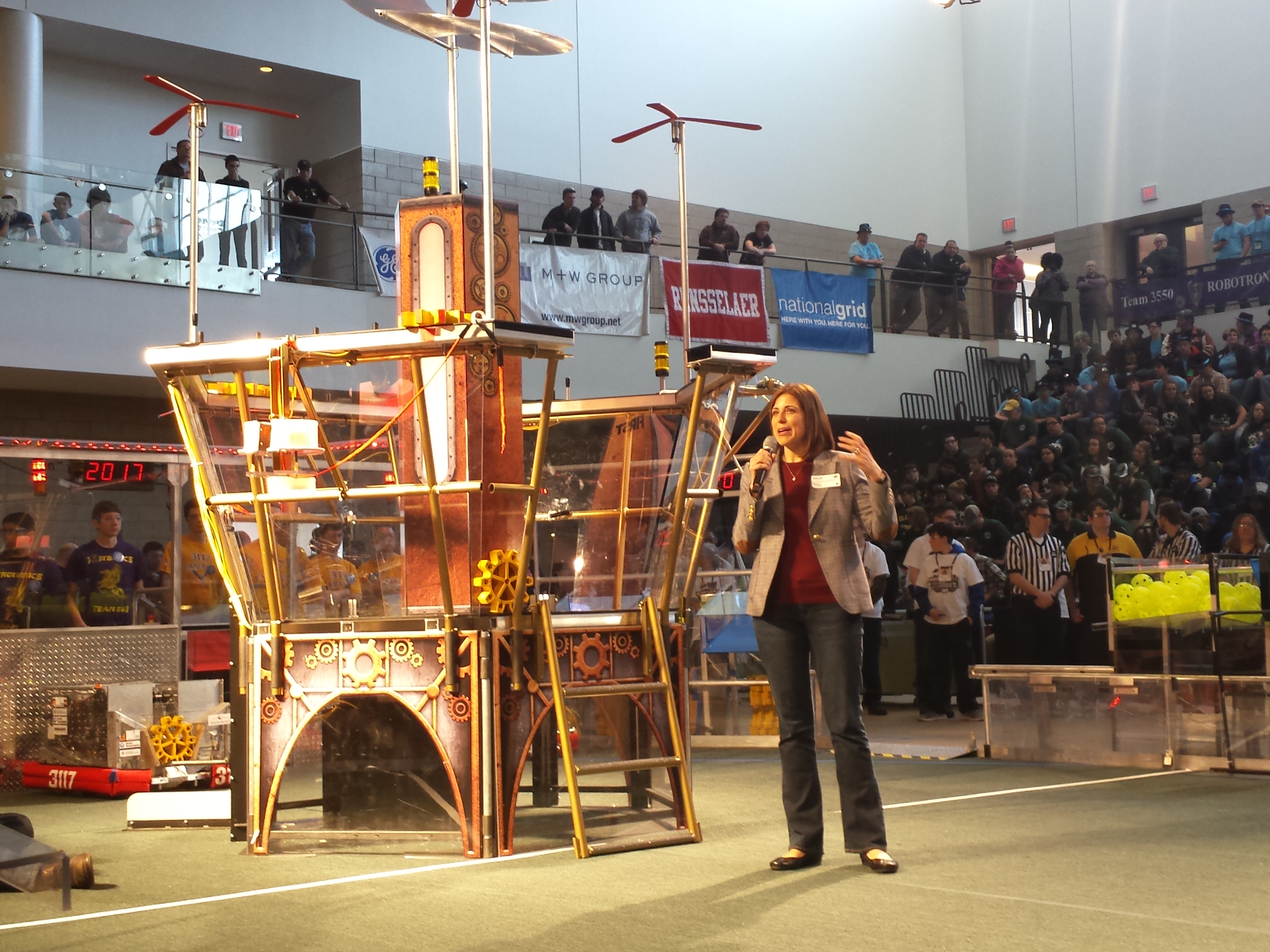 Merfeld at the FIRST Robotics competition. She is a big advocate for girls and women in professional and educational science, technology, engineering and math programs, and for STEM programs in schools. In February she was elected to the National Academy of Engineering. Image credit: Danielle Merfeld

While Merfeld has traveled the world for her job, she says one benefit of the past year has been getting to spend more quality time at home with her kids, who have been “very excited” about her virtual White House trip and “relieved” she doesn’t have to travel during the pandemic. When she’s not working, Merfeld loves hiking, and in the past year has rediscovered her love of painting.

“I get the best ideas when I’m working with my hands-on projects,” she says. “I guess that’s part of being creative. By not focusing on the problem your brain is working on, it can tap into other parts of your brain for an answer. It’s pretty cool.”